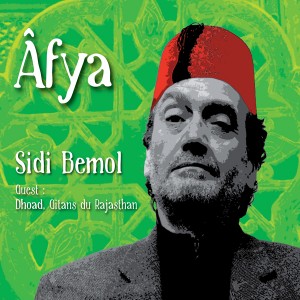 That’s right… Sidi Bemol… it’s as simple as that, let’s leave his honorary title « Cheikh » to one side for now. Humble as always, but full of charisma, Sidi Bemol, now greying a bit, has lost neither his satiric edge and sharp wit, nor the sparkle in his eyes, but he chose to name his latest album Âfya, an Algerian word meaning serenity, peace, elevation, heat and light.

Peace is my ideology, Clear are my intentions. (Âfya 1)

Sidi Bemol has always had an acute ability to travel back and forth between tradition and contemporaneity ; that is what makes his works so rich, and also what entrances his faithful audience. 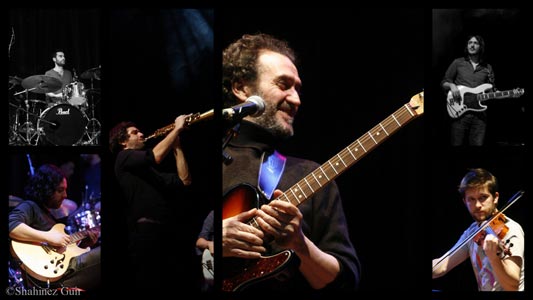 Influence from more modern day styles of music is evident within his new musical composition (Essala, Nekkni …), Sidi Bemol never stops creating, writing, composing and observing the world around him. This is further reflected through the choice of his musicians, themselves a new rising generation: Damien Fleau, Clement Janinet, Benoit Medrykowski, Maxime Fleau et Jean Rollet-Gérard, all of whom share some points in common. Whether graduating from Didier Lockwood school, being brothers and friends, or practising a variety of musical genre (jazz, world, electro, rock, film music …) they are all gifted with a talent and dedication that they use to bring Sidi Bemol’s visionary ideas into life through music.

This is a music that doesn’t forget its traditional songs and rhythms, deriving itself from the roots and timelessness of the greatest Masters… Let’s stop for a moment to listen to the superb adaptation of The Face of Love (The Face of Love © 2014 Womad Music Ltd / BMG VM Music / Robbins Eggs Music with EMI Music Publishing France kind authorization), collaborative work between Nusrat Fateh Ali Khan, David Robbins et Tim Robbins pour le film « Dead Man Walking »

And so, Sidi Bemol, the minstrel, the world explorer, the man who paints a landscape in music, always striving for new muses, a search that has taken him to India, through Turkey (Oylum), and Balkanic Countries (Viraj). He transcends the musical, the cultural, and the spiritual. The common denominator is an openness to the world… an openness of the mind… That’s how, back in February 2012 in Algiers, during the « Gitans Origines » festival , an artistic encounter, as improbable as it was obvious, was born on stage between Sidi Bemol and his quintet and the group Dhoad, Gypsies of Rajasthan. From here he was inspired and driven to repeat that experience on stage and CD. Several titles (Afya 1 et 2, Jnuni, Saâ) take us on a new musical journey, at the cross-roads of maghreb and indian cultures. This was an encounter, first and foremost musical and human, but which, evidently and eventually, took on an ulterior, more profound meaning, inspiring this old Algerian, himself an illegal immigrant, to pay homage to all the vagrants in the world, the stateless people.

« Vagrant of the world away from my people, my heart aching
Time got me in its game and I was dealt a bad hand” (Abrid At Yejjar)

Not only does Sidi Bemol remind us that exile is synonymous with pain, but also that some people are rejected outright and that too often are fingers pointed at them. The Rom community are just one example..

« Are we poisoned ? We shut ourselves off, there is no trust.
When a brother has a problem, we keep him under water, we strip him
The world is doomed, it’s used, worn-out, it’s the end of times.
People become weird and keep on drifting, scientists are amazed…” (Saâ) 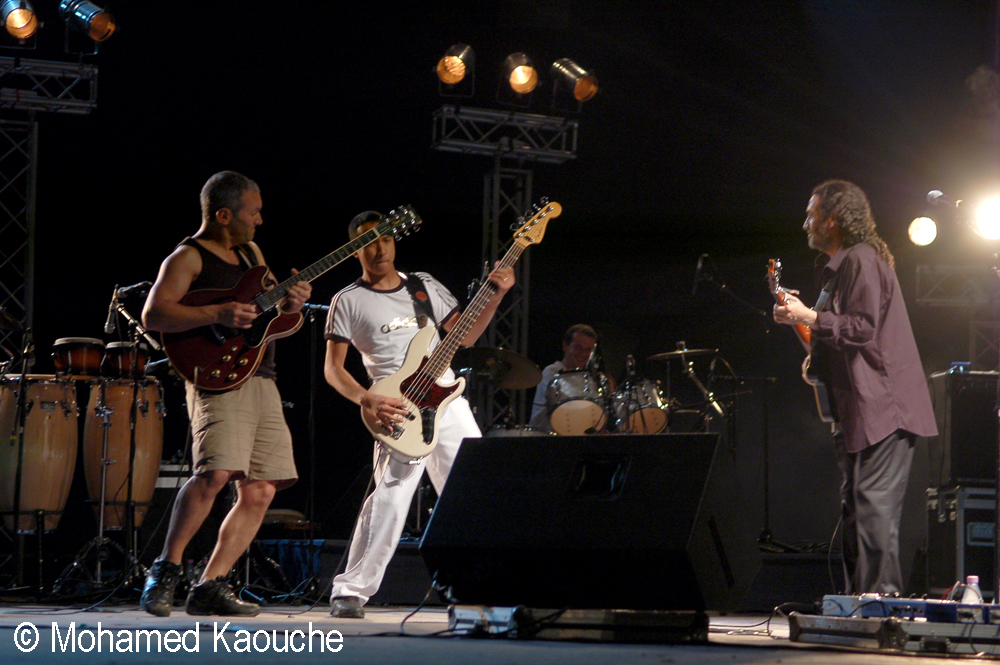 He also mentions those who rely on a divine presence, on a belief which is not only religious, but more simply a way to find deep down inside what you cannot find outside. After all, do we not look inwardly to reveal our inner unexpected resources? Far beyond his compositions, writings and thoughts, a deep voice rises from the heart, Hocine Boukella’s heart. Simply, a man who believes in love. As Boukella wrote: “it’s paramount, only love makes you accept others despite their differences; it’s the only way that we may live together in peace.”

“Love is my guide Whatever occurs.
Let’s follow the path of love, We’ll reach serenity.” (Afya 1)

Surprising by the richness of his music, Sidi Bémol (a.k.a. Hocine Boukella or Cheikh for the fans) is the composer of fusion : between modernity and tradition, between chaabi, gnawa, blues and rock, Berberic and Celtic music. Changing languages over the albums -Arabic, Kabyle, French and English-, his texts are meaningful, successively poetic, nostalgic, critical, humorous. He depicts society with much tenderness and lucidity… 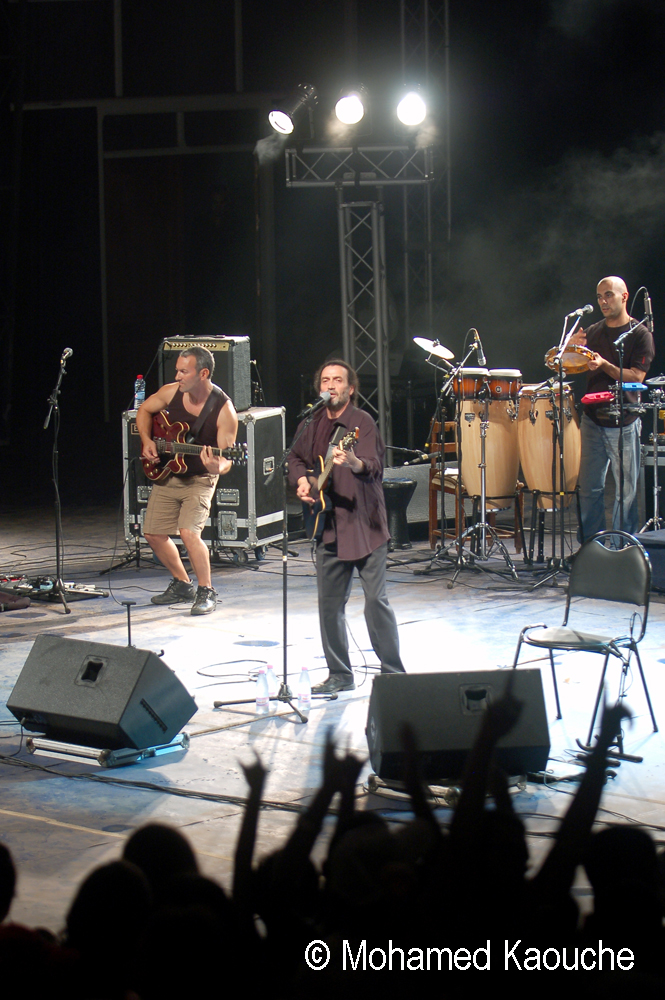 A first opus was released in 1998, conceived like a radio from the seventies broadcasting different musical genres (rock, blues, traditional…). He then recorded a live at the Bledstock (Algiers) in 2000. The year after, with Thalweg, he takes a Berbero-Celtic detour. Then he releases El Bandi, very successful in Algeria since 2003. After having played on many international scenes, Sidi Bémol come back in 2007 with 10 new terribly rock songs in the album Gourbi Rock. Drawing on its success, the artist continues his musical exploration with Chants de Marins Kabyles in 2008, surprising by its originality, its simplicity, the a capella songs reveal a warm Kabyle bluesman voice. He now comes back with a Berbero-Celtic album that links continents around an amazing festive music…

2008 is a significant turn in Sidi Bémol’s career. He plays two full house concerts in a 5.000 seats theater in Algiers. He then hits the headlines of Algerian newspapers. The same year, Lyes Salem, director of Mascarades (December 2008, UGC-Canal+ production), chooses the song Ma Kayen Walou Kima l’Amour to conclude his movie. Last but not least, the documentary Bled-Musique à l’Usine, directed by Samia Chala and Sid Ahmed Semiane, broadcasted every week on Beur TV, is centered on this outstanding artist.

Sidi Bémol it’s also a record label, CSB Productions, that allows him to produce his own albums but also those of Azenzar, a Kabyle singer, Zerda, an Algerian rock band. This label also made Sortie d’Usine, a compilation album bringing together 20 songs from the musicians of Louzine, a Franco-Maghrebin artist collective in which groups like Orchestre National de Barbes or Gaada Diwane de Bechar have developped. In a permanent search for independence, he also created the online retailer Undergroone.

For his 7th album, Sidi Bémol, his festive sounds, the warmth of the Berberico-Celtic groove, invite us to a musical trip from Brittany to Kabylia, from Ireland to Sahara, under the title Paris Alger Bouzeguene.